In French, Vivien’s house is referred to as Hotié, a word derived from the word “host” (hospes in Latin), the one who hosts, who welcomes. This is why it is also referred to as “Maison de Viviane”. Previously called the Druids’ Tomb, Vivien’s House is a burial chamber made of small purple-schist stones, situated on the GR 37.

This monument, a rare kind in Brittany, is contemporaneous with many covered galleries built around 2500 BC. The name “Hotié de Viviane” was apparently chosen to echo the Valley of No Return, a doomed place for unfaithful knights and which harbours the Fairies’ Mirror, home of Vivien, fairy of the waters and Lady of the Lake.

Why the Druids’ Tomb?

This name apparently dates back to the nineteenth century. Indeed, at the time, megalithic sites were often associated with Druid worship. This Neolithic site includes a 2.90-metre-long and 1.40-metre-wide chamber surrounded by twelve red-schist stones. The original capstones covering the chamber were removed.

In 1982, excavations led to the discovery around the chamber of a cairn (a stone monument covering a tomb) with an elliptical shape. This exceptional construction was covered again in 1992, as it was deteriorating too quickly. 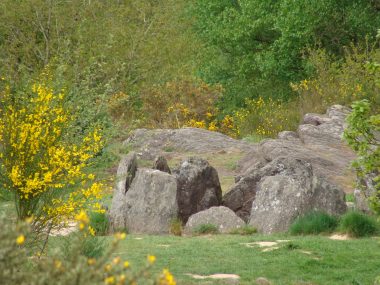