A name that probably stems from its shape and dimensions.

In 1982, excavations of this megalithic monument revealed a wedging structure all around the tomb, about 4 metres long, 1 metre wide and 1 metre high.

Dating back to the Bronze Age, it is a megalithic coffin-like structure the sides of which are made from large blocks of red schist each over 4 metres long. Previously surrounded by a tumulus, this burial chamber is part of a type of tomb used for princelings in Armorica between 2000 and 1500 BC.

Forgotten in the nineteenth and twentieth centuries, the Giant’s Tomb was rediscovered at the end of the 1970s and excavations started in 1982. The tomb, oriented North-West/South-West, includes two main blocks and one isolated block. Originally, the tomb was surmounted by another capstone serving as a lid and the whole structure most likely formed part of a pre-existing alignment of menhirs.

OR THE OLD LADY’S ROCK

The Giant’s Tomb is also referred to as the “Roche à la vieille”. The French expression “la vieille”, the “old lady”, was often used in popular stories to evoke a witch or even Death itself (spooky!). 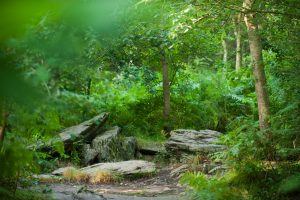