THE OAK OF GUILLOTIN AND EON DE L’ÉTOILE

A remarkable tree and a symbol of protection

You will most certainly be surprised by its exceptional circumference (10 metres!) and its gigantic branches… Previously called Chêne des rues Éon, a tribute to Éon de l’Étoile, this remarkable tree located in Concoret is thought to be between 800 and 1,000 years old. It takes its name from Father Guillotin, a defiant priest who found shelter in the hollow of its trunk during the French Revolution. This version seems to have been inspired by another fact from the same period: a certain Joachim Masson, also a defiant priest, hid inside the oak tree to escape French revolutionaries. He was spared solely thanks to the spider web woven within a few hours across the hole in the tree… Some might read more into this, perhaps evidence of a higher power… Will you? 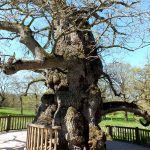 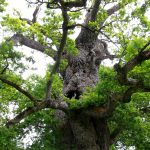 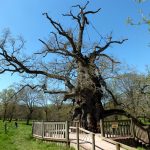 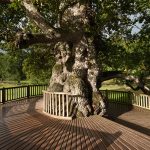 The state of this common oak tree, whose hollow trunk reaches a circumference of almost ten metres, has made it necessary to put in place a health management plan and conservation measures (blocking the entry into the trunk and a wooden viewing platform around the tree) in order to protect it from the flow of tourists. Conservation operations have also been undertaken by the French national forestry office to try and reduce the serious wounds caused by bad weather.

In the twelfth century, the appearance of Halley’s comet induced climate catastrophes and periods of famine across the Western world. Our dear hermit apparently got his name from the stellar name of this phenomenon! This peculiar character, sometimes a prophet, other times a sorcerer, was followed by many disciples. Deemed by the Church to be a madman rather than a heretic, it is said that Éon de l’Étoile and his companions roamed about Brocéliande, pillaging wealthy lords and religious buildings to redistribute to the hungry and destitute folk… Well, well! Does that not remind you of someone? Legend has it that Éon hid two barrels full of gold inside Guillotin’s oak, these have obviously gone missing since then…

The site is accessible year-round.
Location: Concoret, near the hamlet of Crozon.